In the fourth book in Lloyd Alexander's The Chronicles of Prydain, Taran must go on yet another journey—to find out who he really is. Taran is an Assistant Pig-Keeper no longer—he has become a hero.

Now he dreams of winning the hand of Princess Eilonwy, but how can someone who has spent his whole life caring for a pig hope to marry royalty? Eager to learn his origins and hoping to discover noble roots, Taran sets off with the faithful Gurgi. The journey takes the companions to the three witches in the Marshes of Morva and through the many realms of Prydain. 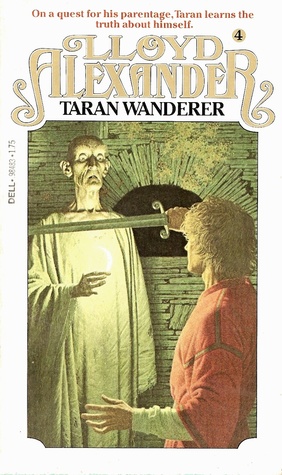 At last they reach the mystical Mirror of Llunet, which reveals a person's true identity. Yet Taran may not be ready to face the truth. Since The Book of Three was first published in , young readers have been enthralled by the adventures of Taran the Assistant Pig-keeper and his quest to become a hero.

Books with a similar title

Released over a period of five years, Lloyd Alexander's beautifully written tales not only captured children's imaginations but also garnered the highest critical praise. The Black Cauldron was a Newbery Honor Book, and the final volume in the chronicles, The High King , crowned the series by winning the Newbery Medal for "the most distinguished contribution to American literature for children. Henry Holt is proud to present this classic series to a new generation of young readers. Jackets have been handsomely redesigned while retaining the original art of Caldecott Medal-winning artist Evaline Ness.

Each retypeset volume now includes a pronunciation guide prepared by Lloyd Alexander. In their more than thirty years in print, the Chronicles of Prydain have become the standard of excellence in fantasy literature for children. The first half of this book is somewhat boring. But, once it hits the middle, it gets really good and interesting. However, it gets even better in the last few chapters when Taran, the main character, begins wandering around and learning a lot of different skills and ideas from different people that share them with him.

He also, in this part of the book, is in a setting a setting that everyone always is in where he is learning from those older than him and being a follower, to turning around and being a leader to those younger than him. That situation is really cool to see in this book because Taran, when being the leader, is leading someone that is in the exact same position that he was in at the beginning of these chronicles.

It's funny because Taran has grown up and matured so much since then and he now has the opportunity to help another go through the same process. Taran Wanderer is the fourth Chronicle of Prydain and one of the most philosophical.

As he grows older, Taran begins to think of seriously aspiring to the Princess Eilonwy's hand - but how can he, when he knows nothing of his parentage or birth? Hoping to find a noble lineage that would make him an eligible suitor, Taran sets out with his friends to discover what he can of the world and his place in it. It's a quest story, really, but the object of the quest is self-knowledge rather than a magical item.

Of course, there is a magical item that comes in very handy in one of his adventures along the way Morda's finger - to which Rowling's Horcruxes bear a very direct resemblance. But what Taran is really looking for is within. This sounds like a very 21st-century, self-esteemist, humanist perspective no thanks! He actually faces failure after failure in his own abilities as he travels the Free Commots and seeks to master the various trades and callings of its people.

When he does find Craddoc, a humble shepherd-farmer who claims to be his father, Taran must make the hardest choice of all. Throughout the story there's a clear-cut villain in Dorath the outlaw, but on reflection I think he is really just a personification of Taran's own worst side: what he could become. After The Castle of Llyr, this was one of my less-loved of the Prydain stories, probably due to the lack of battles and enchantments and traditionally heroic deeds. But rereading as an adult has made me appreciate its depth a little more.

The direction Alexander takes his story is so much more genuine and wholesome than the usual Disney tripe of "look within to find your destiny. What a fantastic setup for the final and most moving Prydain Chronicle Taran Wanderer is either a book you will love most of the five or the one you will like least, it seems. As for me, the fourth of the series is perhaps my favorite. Learning who you are is a journey that each of us must take, but few of us have the influences of such a strong cast of supporting characters.

Yes, this is a book of characters, not of action.

This is a story of development, not necessarily of battle. For those reasons, I, a mother, cherish it. This is the best of Alexander's Prydain novels, in my opinion. It's less concerned with princes and wars than it is focused on Taran's growth from a boy into a man. By turns joyful and bittersweet, this was wonderful. Here at Walmart. Your email address will never be sold or distributed to a third party for any reason. Due to the high volume of feedback, we are unable to respond to individual comments. Sorry, but we can't respond to individual comments. Recent searches Clear All.

Update Location. If you want NextDay, we can save the other items for later. When he meets Yan, at first, his first thought was to help the young man, but the more he interacted with him, the more he feels alive. I love Lyuc. The only thing he wants is a family, his own family. Yan reminds Lyuc what life is, how it can be not to be alone forever. I really liked this book. The characters are lovable, and the story was good. The plot was around Lyuc and Yan but not only focused on them, as we also learn the background of their universe and where and how their world and rules is situated.

Yes, a beautiful tale! I've loved everything they ever wrote, since then, and this is no exception. The Wanderer is a great fusion of historical and fantasy, combining romance, magic, and action into a novel that will steal your heart. Bryn is actually a genderfluid other being. Bryn is created from the Rift, a Spawn from another dimension, but far tamer and more human-friendly than any of the others who slip through the Rift and must be hunted by Lyuc and sent back to their own plane.

Bryn mostly presents as a horse, but has shapeshifting abilities, and appears as both a male and a female human at times, but is mostly referred to as 'he' when in his horse form. Lyuc is an ancient wizard, once thought a God, who made a mistake centuries ago and is enduring self-induced penance to try to make up for that.

As the creator of the Rift, he hunts the Spawn creatures who come through — often against their will and without any knowledge of the human world or how to survive in it — and sends them safely home. But, he's also a wanderer, travelling as an old man, who does little magic for fear of being caught by the humans who believe him dead.


Both the King's witches, the Scholomagie in Samebar, and a secret organisation called the Brotherhood of Harot in Rassa, would cause a war in an attempt to gain the knowledge only Lyuc possesses. Yan is an Unnamed, or Nameless. He is a child whose parents died or abandoned him and he was never given the mark of a Named — a tattoo on his wrist, to mark him as someone with a family, and the grace of a last name.

For this, he's treated like a servant, the lowest caste in existence, and has no ability to refuse a Named anything. Even when that means being beaten, whipped, accused of theft, or forced to perform sexual acts.

Yet, Yan's spirit isn't crushed. He's managed to retain a piece of himself, his personality, his anger at the unfairness of his position in the world, even when it gets him into trouble. He's in the human world to make amends for messing it up in the first place, hunting the Spawn and trying to keep the Rift from doing any more harm. He's hopeful — and it's mentioned as discussed frequently throughout — that the Rift is close to closing. The secondary plot — though it takes more pages than the primary — is that of the romance between Lyuc and Yan.

With Yan an Unnamed and Lyuc a Named, they have to make sure that any and all public meetings are considered appropriate. At the same time, Lyuc begins the book hopeful that his penance is almost over, that he'll be able to close the Rift and die soon, his job completed. He has no interest in starting something with Yan, no matter how many times the young Unnamed offers. Part of what I loved so much about the plot was that Yan was the instigator in all things romantic. It started out slowly, with small acts of kindness from Lyuc and appreciation from Yan, then grew into a natural attraction.

I worried, at first, that Yan only offered because he thought it was expected of him and because he wanted to repay Lyuc, which made Lyuc's reluctance more than natural and a relief. There was no insta-love, though it was clear they were both attracted to each other, but both had reasons to resist that attraction. The fact that Bryn had to shove them together, more often than not, was a really nice addition to the plotting.